The Festival and Gerry Whelan Story

This year the 16th Gerry Whelan Memorial weekend will take place in Cootehill, Co. Cavan from 9th – 11th September. It is a festival of music, singing and dancing that has become firmly established as one of the highlights on the County Cavan annual calendar of events. The Gerry Whelan event started on July 8, 2005, with a memorial concert organised by Martin Donohoe and since then has become a weekend event that has grown from strength to strength each year.

Gerry  was born in 1918, a few miles outside Mohill, County Leitrim.  His father, who died in 1927, played the fiddle and people making music, ceiling in their house at night, was part of his introduction to Irish music.  He grew up with a great love of music, a love that he carried throughout his life.  Gerry started lilting and singing at the age of three. By the age of six he could lilt at least 60 reels and jigs and sing quite a few songs.  When he was seven years old he played his first tune on the mouth organ.  Later he progressed to playing the melodeon and at the age of 17 acquired his first Hohner button accordion. 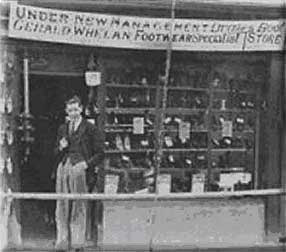 Gerry’s life took many different turns, in Ireland and England.  Yet throughout the good and bad times he maintained his love of music.  During his brief time in England he joined up with a ceili band in Weybridge, Surrey and played every week at dances and events.  When he moved back to Ireland and set up business in Cootehill in 1939, he sought out people who shared his love for music.  He organised a “Sessiun“ in Rice’s front room, where he and four or five local people from the town played music every week, at a time when there were no Fleadhanna or sessiuns in pubs.

With the founding of Comhaltas in 1951, Gerry said the music he knew and loved was injected with new life.  Gerry got actively involved with Comhaltas at the organisation’s inception and was President of the Ulster Council for a period of 30 years.  It was perhaps fitting that he still held the position of Honorary President at the time of his death, on 28th February, 2001, the year in which Comhaltas was celebrating its 50th anniversary. 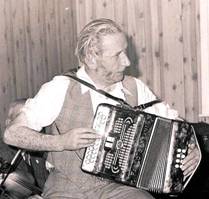 While playing and celebrating traditional music was a major part of his life, Gerry was passionate about the music being passed on to future generations.  One way he believed of achieving this was to teach music to young people.  He was involved in setting up music classes in Cootehill throughout the years and was instrumental in setting up St Michael’s Marching Band in Cootehill in 1967.  The band won a lot of major competitions and his proudest moment was when they won the All-Ireland Marching Band competition in 1972. 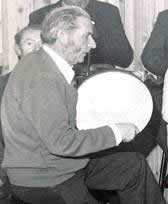 Gerry gave unstintingly of his energy, vision, drive and commitment to the revival of traditional music and the development of the Comhaltas organisation and network in many different ways.  Despite the fact that he was a very successful businessman, in music circles he was always the unassuming ‘Gerry Whelan’ who loved to play the bodhran and melodeon and meet people from all walks of life.   From my own perspective, my feelings about my father are summed up in the words of the song written for Ted Furey by his family:

He was more than just my Father.
My teacher, my best friend.
And he`ll still be heard in the tunes we play,
When we play them on our own.

May he now be enjoying the eternal music in Heaven.  Ar dheis Dé go raibh a anam